The Power Of (Bad) Habits – And How To Change Them

Imagine this scenario: you wake up in the morning with a hangover, you barely make it out of bed, you go straight to make your first cup of coffee of the day and you drink it while reading the newspaper which, btw, is full of bad news that makes you feel insecure, scared and anxious. Your commute is a nightmare and you curse pretty much anyone or anything that crosses your path. Eventually you get to your office, where you spend the rest of the day doing stuff you don’t really want to do.

Does it sound familiar? Does this series of repeated events resemble your typical day? If so, these are more than just random repeated events; these are habits that you have unconsciously acquired.

Habits are not necessarily a bad thing; according to the American Journal of Psychology, they are just are a “fixed way of thinking, willing, or feeling acquired through previous repetition of a mental experience”.

We should make a distinction between habits in our actions or routine, like the scenario above, and habits in our way of thinking and attitude. We dealt with the latter one in a previous post, so let’s focus on the former.

How do habits work?

Some habits can be good, some can be bad, but all of them occur without our direct attention or desire. They happen because we have adopted them and are so used to them that we don’t even make room for questioning.

As explained by Charles Duhigg, habits have 3 common elements that work on a loop: 1) a cue or trigger; 2) the routine itself; and 3) a reward. 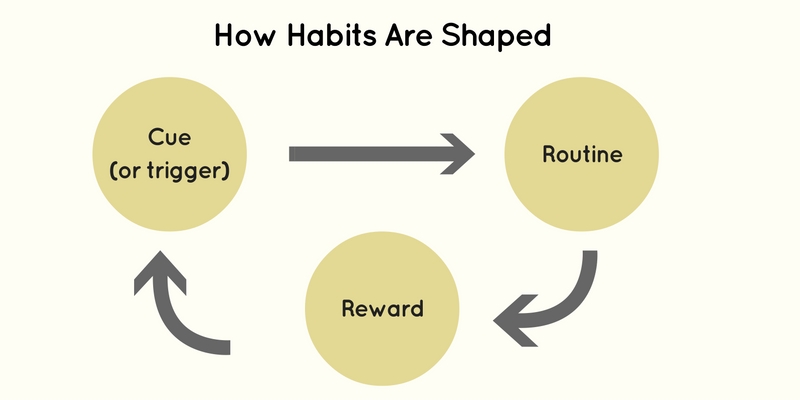 Changing a behaviour pattern might not be fast or easy but, according to Duhigg, with time and effort, almost any habit can be reshaped.

One of the main keys to change is to identify the whole loop, in particular the cue. For example, if I always have lunch at my desk in less than 10 minutes, then I should ask myself some questions: Why am I doing this? Is it because I am that busy? Is it because I don’t enjoy the chit-chat with my colleagues? Is it because I simply don’t care about my diet? Or is it because I want to give the impression that I am always very busy?

And what’s the reward? Is it the pleasure of having the job done and an empty to-do list? Or of having some silent time? Or of being rewarded with a promotion or a salary raise?

And then the obvious question: is there any other way to get this reward through a healthier routine?

As we usually say, all the answers lay within us.

We might live our lives in a more or less serene manner, but bad habits or vices will claim their price one day or another. Habits that begin as small traits or actions can become a huge problem given enough time and repetition.

But, as we said, bad habits are not just limited to our physical wellbeing and health. Some habits are related to our personality and attitude. Some of them are so harmful that they become self-destructive and can push people away from us. Examples of those are looking constantly for people’s approval, thinking we know it all, self-pity, etc. 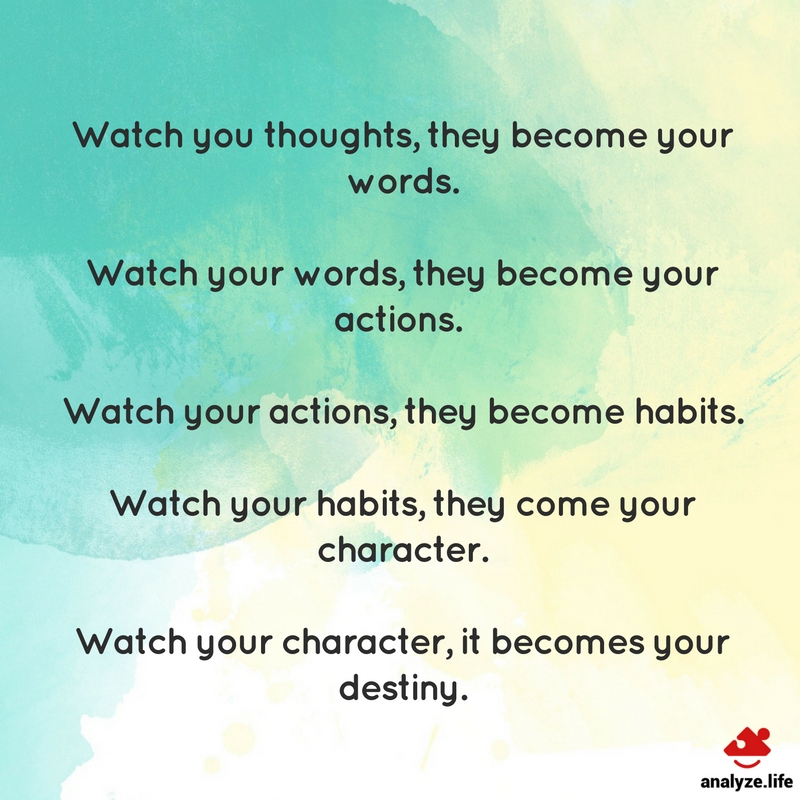 This quote, whose author was never confirmed, shows the great power even a small action has, not to mention already established habits. What begins as a thought might end up as our destiny.

What can we do about the not-so-welcome habits we have acquired over the years? As we mentioned previously, the first step is to understand the loop, but it is important not to make big changes or to change many habits at once. Begin with one habit and slowly work towards a major shift to avoid frustrations.

Here are some alternative methods that could also help you change your habits, and maybe even your destiny:

1.Keep a Journal or a Personal Blog: Writing down your thoughts is a great way to notice them. By writing, you are actually transforming those elusive virtual strings of feelings into words, allowing yourself to watch them and monitor them. But what’s interesting (and believe me, I’ve tried it) is that over time, when you come back to what you wrote weeks or months ago, you’ll notice not only which thoughts are beneficial for you and which are harmful, but also your progress.

2. Try a 21-Day Challenge: While the common myth that it takes 21 days to form a new habit was busted a few times over the years, it’s still good to try; it’s not a very long commitment, yet it provides enough time to see if the results are beneficial to us.

3. Establish a New Routine. Is it excessive intake of caffeine that is bothering you? Drink one cup less than you are used to. You feel like you have a bad case of road rage? Try counting to three before commencing the verbal abuse of the other drivers. Alcohol is your problem? Limit yourself to drinking every other day instead of every day. Just like those habits were formed, you can form new and better ones with your will and confidence.

The most important thing about change is to take it slowly. If you begin too fast, probably the change won’t last. Let your new behaviour percolate into your daily routine, and you might end up a completely different person, with much better positive habits.

The most important thing about change is to take it slowly. If you begin too fast, probably the change won’t last.

For more ideas and motivation to change some habits, check out these other publications!