Uplifting stories: the homeless man, his dog, and the helper

In an earlier article, we showed the scientifically-backed reasons why being kind can make us happy. We found research that states that kindness is contagious and if more acts of kindness were shown in the media, people would start to respond and be kinder. Challenge accepted 🙂

A few days ago we came across the story of a guy who spotted a homeless man quite a few times in the same place, always accompanied by his dog. He was begging for money and also food to feed his pet. 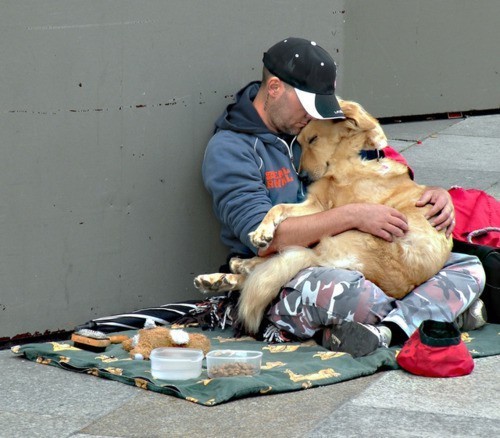 The guy who saw them decided to help with a bag of breakfast for the man and a small bag of food for his dog. The homeless man gave him a big smile when he saw his breakfast, but got even more excited when he got the bag of food for his little buddy: “when I handed him the bag of dog food the guy literally lost it and started bawling right there on the side of my truck.”

The helper, probably experiencing what some scientists call “the helper’s high”, went a step further and offered the homeless man a job; he said that if he was prepared to work hard, he would pay him $80 at the end of every day. The homeless man didn’t hesitate and accepted immediately. The helper would pick him up every day, take him to work, and drop him off at his usual spot. Indeed, he was a hard worker, and his dog was his shadow – he followed him everywhere.

One day, the homeless man said to the helper that with the money he had been earning, he was now able to afford camping provisions for a few months and told him how much his help has meant to him and his dog, and how happy he was that they will now be able to leave the cold of the streets.

The helper felt so good that, although the camping site was on the other side of town, he decided that regardless he would go out of his way and continue picking him up every morning.

This is an example of the “positive feedback loop” between kindness and happiness we mentioned in our post “The science of happiness: why being kind feels good”: being kind makes us happy and being happy makes us kind.

We hope we have inspired you to do something kind today. More short stories like this will come. Maybe next one is yours?

Have a great day.