New Happiness Equation: How Other People’s Fortune Affect Our Own Happiness

In 2014, a team developed an equation to predict happiness in which expectations played a huge role. Now the formula has been updated to show that our happiness also depends on inequality and on how our situation compares to other people’s.

The new study found that inequality reduces happiness regardless of whether we are doing better or worse than others. As part of the research, subjects played the dictator game in which a subject decided how to split an endowment with one of the other players.

The results showed that regardless of whether the subjects themselves won or lost, the average well-being was attenuated for unequal compared with equal outcomes. This means that, on average, when the subjects won, they felt happier when their partner also won. This difference could be attributed to guilt. Similarly, when people lost, they were happier when their partner also lost, a difference that could be attributed to envy. 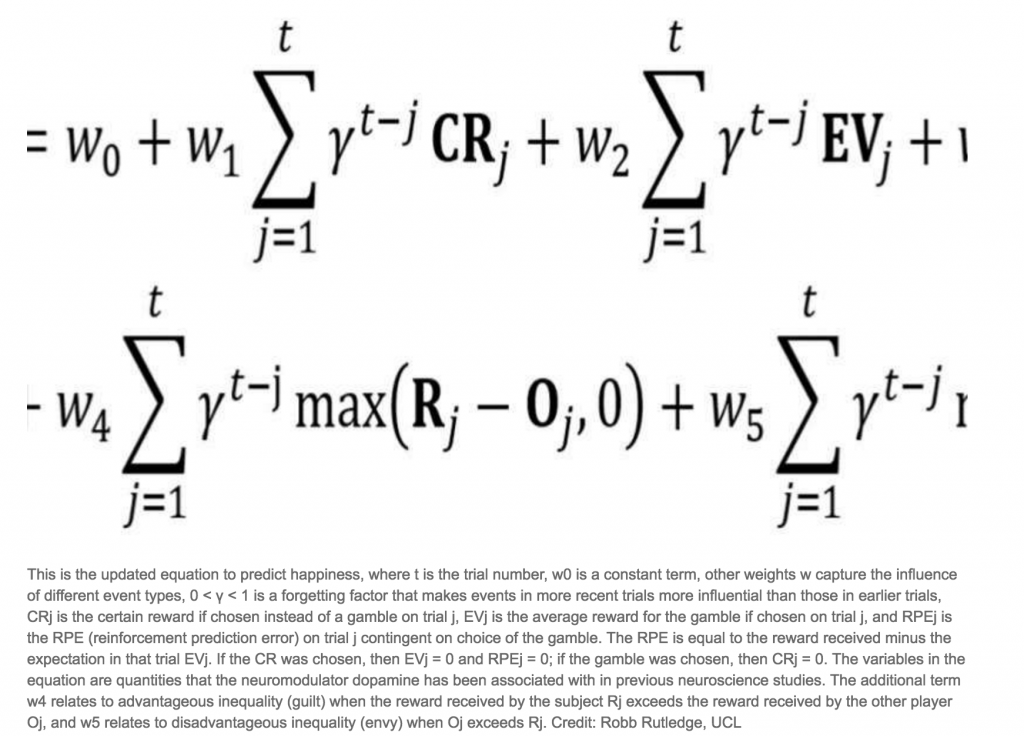 “Our equation can predict exactly how happy people will be based not only on what happens to them but also what happens to the people around them,” explains one of the study’s co-lead authors, Dr Robb Rutledge (UCL Institute of Neurology and Max Planck UCL Centre for Computational Psychiatry and Ageing Research). “On average, we are less happy if others get more or less than us, but this varies a lot from person to person. Interestingly, the equation allows us to predict how generous an individual will be in a separate scenario when they are asked how they would like to split a small amount of money with another person. Based on exactly how inequality affects their happiness, we can predict which individuals will be altruistic.”

The researchers found that the emotional impact of guilt and envy is predictive of generosity. Some subjects would give away part of their money when they won and their partner lost, and these were people that would not feel envy when they lost. In contrast, people who kept all their money after winning would experience envy when the result was unfavourable. This particular result, plus the methodology applied, showed that people’s generosity was not dependent on the affinity with other people but rather on a stable personality trait.

Read more about generosity and kindness, and why science shows they make us happier. Check it out here.